Here’s a scenario that was described to me by a friend of mine.

One down playing the ninth end and our hero, throwing Red stones, has the hammer. His opponent is throwing his final stone, Blue. There are no rocks in play except for one Red stone at the back of the eight foot. The Blue skip is about to throw his last rock. We would expect him to hit and stick, hoping our hero noses for one or, at worse, blanks and remains one down coming home.

Instead, the Blue skip chooses to attempt a freeze. This shot call appears to conflict with common curling strategy, but, using math, what is our analysis of this play?

Option 1: Hit
Let’s assume the odds of Blue missing the hit as negligible. Either he rolls out and a blank is assured or, Red rolls out most of the time for a blank. To simplify, let’s state the odds of a blank are 95%.

Option 2: Freeze
Possible outcomes after Blue’s shot:
Blue needs to initially estimate his chances of making the freeze. Let’s estimate this and other Variables:


Further math is then required for the “near-freeze”. Let’s start by estimating that, after a near-freeze, Red will always attempt a hit. Variables as follows:

Very close to our original result. This would imply that, based on our estimates, either decision is correct.

Using some other values for b, t, s

Not very drastic changes, even if Blue steals 20% and forces Red to one 30%, we only increase our chances 3% over hitting. Given these numbers are very close, let’s use 62% (our original estimate), and make changes to the original variables on Blue’s shot. 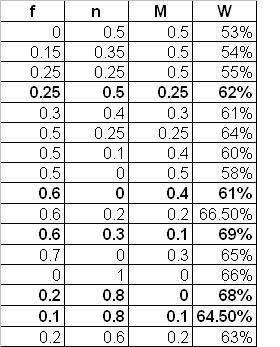 What does this show us? If Blue can make the freeze 60%, even if Red scores a deuce the other 40% of the time, our decision is equal to hitting. If, however, Blue gives up a deuce at least half the time, they are making the wrong call.

However, making a perfect freeze, even at the top level, is very difficult. Our original estimate of 25% is likely high. I suspect the chance of a near-freeze is greater than 50% and the chance of a deuce is the greatest Variable in our decision. Notice if f = 0.2, n = 0.8 and m=0, we jump to 68%, but if we add 10% chance of a deuce we drop down to 64.5%. It is my opinion that Blue must be confident they will not allow Red to score a deuce more than 20% of the time, in order for the reward to be greater than the risk.

I suspect that Blue was not aware of the actual statistics for 1 down in the 10th with hammer. Many competitive curlers believe (incorrectly) the number to be greater than 40%. I know many players who felt that it was 50% or slightly higher – prior to Curlingzone statistics being available. At first looking at these numbers, I myself was surprised at the results seen in 4 rock play.

For what it’s worth, in this example Blue made a perfect freeze, Red was held to one and lost in the 10th end.

Let’s go back to our original Assumptions:


We simplified in order to do a quick analysis. If we dig deeper, let’s create some additional scenarios.

Only 1% higher than our original analysis. Our assumptions appear to be accurate for our purposes.

Some readers have mentioned that, though interesting, these studies are not practical for game situations. I disagree, and here’s why:

Many game situations are similar and occur often enough that “off-ice” analysis can prepare a team better for these game situations. The article here is one example. This is similar to how poker players practice decisions away from the table.

A coach could have a computer with a spreadsheet available to run scenarios and a time-out can be used to discuss.

Players can make these decisions on ice and, with some work and practice, can examine even more complex situations.

That’s nearly the same as hitting, but:

a. I have confidence and think a deuce is less that ¼, therefore I will draw

b. I don’t trust the ice or my weight, I will hit because a deuce is likely greater than ¼.

Some may argue “but I knew that already, I draw if I can make it!”

In poker, an amateur player may make the same decision as the world class player on whether to raise or call. However, the ability to work through the process and make more correct decisions and know why they are making them, is the difference between an average player who breaks even or loses, and a world class player who wins all the money. I believe this analogy applies not only to curling but many other areas in sport, the stock-market, and in life.

Posted by Kevin Palmer at 1:25 AM No comments: