Notes from the Pre-Trials (AKA “Road to the Roar”)

I’m struggling with this event called the Road to the Roar or more aptly named Pre-Trials. It reminds me of the NFL deciding to increase playoff teams from 10 to 12 in order to generate more games (and more revenue) on opening “Wild-card” weekend. It’s not that the entertainment isn’t there, but why not just have 16 teams at the Trials in December? Money must have something to do with it. Or perhaps the 400 or so people in the stands in Prince George demanded their opportunity to shine in the spotlight.

Some random thoughts and analysis….

1. TSN please show me the first stones of the end! Not doing so makes it hard to understand what strategy is being played. I couldn’t tell if Gunnlaugson had some strange calls or they just missed shots. In 7th end Gunnlaugson is up one without hammer (5-4) and plays a centre guard, rather than in rings. Perhaps he read my article from February 2009 where I stated “If we are one up in the 4th or 7th, we should force our opponent into scoring, even at the risk of a deuce, in order to have hammer in following end.”

2. During the 9th end of the C Final between Gunnlaugson and McEwen, Linda said "hammer is still the advantage in that last end”. This isn't quite correct as a team would prefer to be one up without hammer vs one down with. The correct strategy is to play for a steal at the risk of a deuce in the 9th end, and if you force your opponent to one you increase your chances to win from 60% to over 75%. I didn’t see if Jason intended to play their first rock in the rings because, per note 1 above , TSN didn’t show it! I don’t like the 9th playing out the way it did for Jason. Much better for him to be aggressive in this situation.

3. Simmons vs Stoughton, A Final. Interesting choice by Simmons to hit and roll in the 8th end. It appeared he could have played a draw and sit shot stone frozen to the Stoughton rock behind the button. Possible he was concerned by lack of curl or afraid of leaving the angle raise or other shot for a big end. 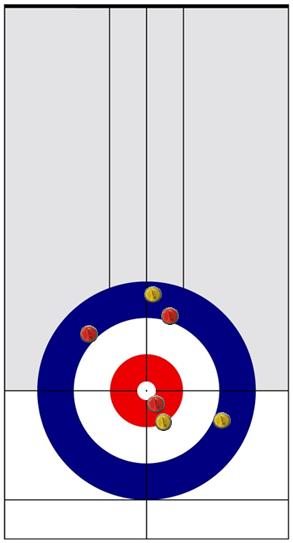 This is an important point in the game. Simmons is two up and holding Stoughton to one is a huge advantage. Simmons chances of winning goes from 67% (tied with hammer and just barely Control) to 86% (and Dominant Control) if he holds Stoughton to a single instead of the two he surrendered. Even if Stoughton makes a circus shot and takes three, Simmons still has 37% chance to win. I prefer the draw for these reasons and if he comes short he still leaves a very difficult shot for two.

4. Yes Mike McEwen, you should have played the double in the 8th end against Jason Gunnlaugson in the C Final. Your margin for error was substantially smaller with the hit and stick you attempted. Also, you left your opponent a chance, the other option did not. Kevin Martin would have removed both those stones before you got in the hack. I suspect in years to come you will also. 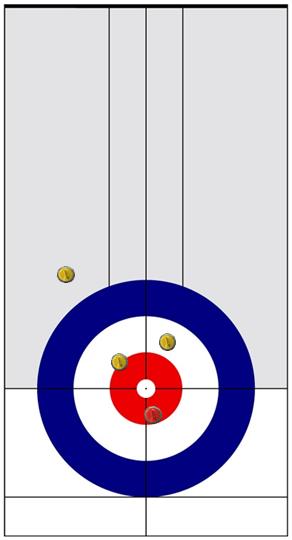 McEwen is Red
5. The B Final, 8th end. Simmons is up 5 to 4, McEwen has hammer. Simmons plays the run-back again on his last shot. 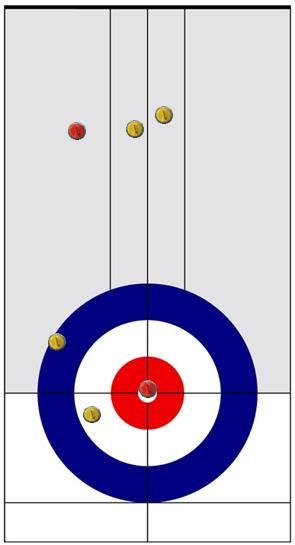 He could have chosen to draw instead. A successful run back likely forces Mike to one anyway. It appeared an out-turn draw to the face of the stone could provide the same outcome with more margin for error. However, the amount of curl may have weighed in on the decision. Let’s take a look at Pat’s thinking:


Draw: Let’s expect Pat makes a reasonable attempt to draw to the face of Mike’s stone but Mike makes his draw 50% of the time.

Run-back: How often does Pat need to make the shot for it to be the correct call?


Note we assume Mike always scores two – in the actual game his rock caught debris and he did not, but that is assumed to be minimal for our analysis and then can be factored into our decision later.

6. Same game, 9th end, Simmons plays a corner guard? Interesting call (unless of course he was light). Stating that he prefers to score multiple points at risk of a steal, rather than leave a possible blank open.

7. Same game, same end. McEwen’s first stone, he plays a run-back of the centre guard to Simmons rock in the top four. Giving up a deuce here is not good (less than 12% to win). Mike must hold Simmons to one or possibly steal. 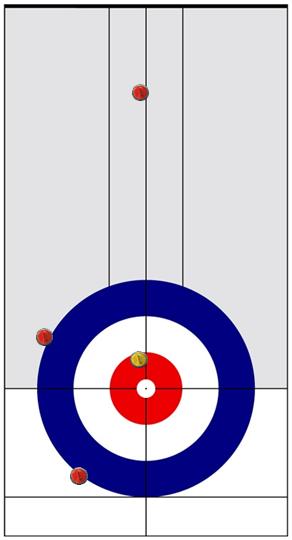 I like keeping the centre guard in this situation, if only to keep the middle protected. At this late stage, he may have felt there was no good placement in the rings and he may be correct, but see how this decision drives the next decision? Even if he makes the shot (which he did, but was unfortunate the jam) Pat still can make another strong come around (which he did) and put himself in good position for two.

On Mike’s last I’d almost prefer a draw to either freeze or the back four foot. 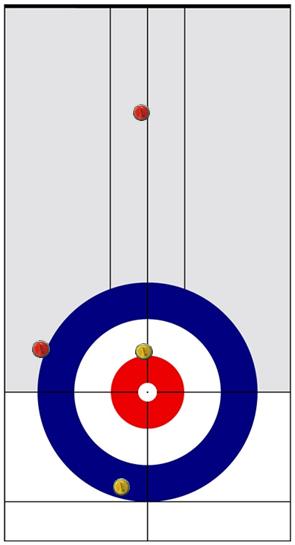 As difficult as the shot is, the run-back needs to be a double. The issue here is, a deuce or a three have nearly the same outcome: you are very unlikely to win the game. The interesting analysis here is, Mike deciding to run-back on his first was already setting himself up for another run-back on his second. In essence, by calling it once, Mike is saying “I will make this shot twice” In making that decision, might be wise to determine your odds for making a run-back (ahem) back-to-back. If your chances are 90% of making one, then two in a row is (.9)x(.9) = .81 or 81%. If you only figure 80%, then you drop to 64% to make two in a row.

8. I grew up a rink rat at the Assiniboine Memorial in the mid 80s, watching Kerry Burtnyk. One of the classiest champions curling has ever seen. Kerry’s loss to Gunnlaugson was heart wrenching. His last rock in 10 needed only to roll an inch, it did not. Then a draw to the full eight turned into a burned rock, ending Kerry’s chances at an Olympic medal. I was hoping to see Burtnyk in Edmonton, but it is not to be. We can only hope he makes another run or two at a Brier bid (a la Werenich in 1995 and 1997).

9. Back to McEwen vs Gunnlagson, C Final. In the 8th end, up 6-5, Mike appeared to be in good position, sitting first and second on BJs first rock. They called time out, thought for a while, then peeled a corner guard. 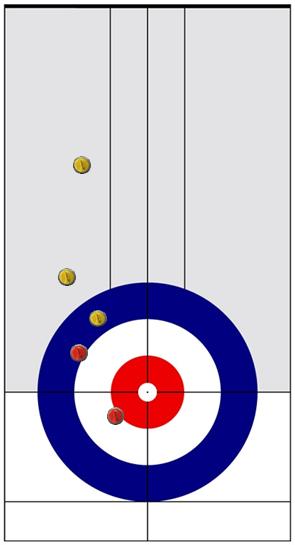 I was unclear to their thinking here, other than it seemed like the best idea at the time. It didn’t appear to have much impact on the end. Alternatively, they could have chose a more aggressive play, either draw to open side or play some type of tight guard or draw. The rock they were concerned about (top yellow) did come back to haunt them later in the end. Mike commented they would have to make “a lot of good shots to get two” and, as often happens at this level, they did. The best part of their decision was avoiding 3, so we can’t fault them for that. And as I said above, if Mike had just played the double on his last….

10. Interesting choice by Jason to play a centre guard when one up in the last end without hammer. Mike doesn’t bite (perhaps Jason wanted him to?) and choses to play a corner guard rather than draw to centre.

Good luck to all in the “Actual” Trials, which I suppose we could now call the “Pre-Olympics”. Final thought…..is it too late for some young team to pick up Russ Howard?

Posted by Kevin Palmer at 1:14 AM No comments: