Guy Hemmings found curling by accident. Having moved to Montreal for University, during a Sunday morning walk he saw a sign to try curling at the Outremont Club. This chance encounter would eventually lead him to skip Quebec to the Brier finals. Twice. Guy, along with Pierre Charette, Guy Thibaudeau and Dale Ness, won over the crowds in Winnipeg (1998) and Edmonton (1999) with their play on the ice during the day and in the Patch each night. Guy shares his passion for the sport and describes what it's like being a celebrity in Western Canada while going unnoticed in your hometown.

Posted by Kevin Palmer at 11:09 PM No comments:

Semi-final Finagling at the Brier

As I begin, the 2020 Tim Horton’s Brier Semi-final just ended and only a few hours to go ahead of the Final between Team Gushue of Newfoundland & Labrador and Alberta’s Team Bottcher.  The Semi-final included several interesting decisions faced by both Gushue and Team Dunstone of Saskatchewan, and three in particular have inspired me to post some analysis.  No further time for preamble, let’s get to it… 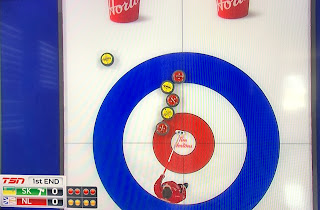 They could blast and likely kill all 3 reds, keeping a possible force in play but also a likely blank.  They also consider drawing around behind everything (where Brad’s broom is placed in the photo) but ultimately decide to place a guard on the centre line.
No math to examine here, just an interesting decision with 3 options that came up in the very first end.

Some fans lament low scoring games and multiple blank ends.  Even during this Brier, which had plenty of thrills (perhaps more final big shots than any in my lifetime) a few posted on twitter that some games have been boring because of too many blank ends.  “If you blank you should lose hammer” has been thrown about before and surprisingly still is heard now, despite the 5 rock free guard zone (FGZ) rule in effect across all competition.

This first end situation is an example of why a blank allowing the team to retain hammer is essential to curling.  Gushue, with no pressure to force in order to get hammer, would simply blast all the rocks.  No options and less strategy, THAT makes the game boring.

Saskatchewan is looking at either a nose hit for 1 point or a possible double and roll out for the blank. 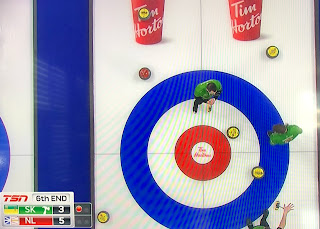 You can hear Team Dunstone on the broadcast discuss their options.  Not sure if Matt did an actual calculation, but he could have determined the likelihood of making the shot required based on probable winning percentages.

With 4 ends remaining, we need to consider only 5 rock FGZ results.  Side note that it is possible in late game situations (tied or one down) to disregard 5 rock FGZ because it makes no difference to the play, but not in this case.

However, this game is being played against Brad Gushue. Brier, World and Olympic Champion.  If we look only at Grand Slam events for the past 6 seasons (all 5 rock FGZ contests), two down is the same (WP=22.8%) but teams 1 down without hammer drop to 13.7% win probability.  Granted, the sample size is much smaller (25 out of 183 situations) but it’s safe to assume that the best teams in the world are much better at protecting that 1 point lead with hammer, even against competition as strong as Team Dunstone. If we use 13.7% as their expected chance to win, then Matt should try to blank if he figures to make the shot 3 times in 10.  This assumes he either makes (blank) or misses (steal), which is not exact because sometimes his shooter won’t roll out and Saskatchewan will be forced to a single anyway.  In retrospect, I believe attempting a blank would be the better decision.

This is yet another example where the choice to blank provides a second option and adds more strategy to the sport.

Only two rocks remain and Gushue is facing this... 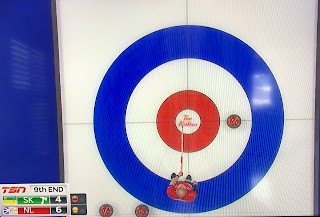 Traditional thinking would have Gushue nose hit the Saskatchewan rock, likely leading to a blank and two point lead in the final frame.  Instead, Gushue decides to play a freeze-tap on the stone and leave Dunstone a delicate shot for two points. 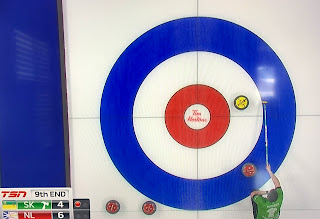 Matt makes his final shot for two points and it’s all tied at 6 ends heading to the final end, Gushue with hammer.

Go back 5 or 10 years, under 4 rock FGZ, and Gushue is making a poor decision.  Now, with 5 rock FGZ and improved level of play, it’s not as clear.
I understand the desire of top skips to always desire hammer in the final end.  Nothing must be more helpless than standing at the boards and watching a shot like this.

With all that in their memory bank, I can understand the desire for skips to prioritize hammer in the final end, even if the data may support the opposite.  Under 5 rock FGZ for World Ranked events, the odds to win down 2 points with hammer in the last end have only improved slightly (about 11 to 13% for men).  In fact, for Grand Slam events it’s actually 11% WP, indicating the best teams (no surprise) hold the lead better than the broader field of competition.  In this case, Gushue should expect to win 89% of the time if he hits.  But it’s that 11% and what it can feel like that I’m certain is sticking in his mind.

Win probability when tied with hammer, the result of Brad’s shot decision in the 9th end, is what we want to examine.  The ability for top teams to execute the tick shot and finish the game in this spot has dramatically increased in recent years.  While world ranked events continue to indicate a roughly 75% WP (much lower than 89%), in this season and last, Grand Slam events (minus Tier 2 and Champions Cup results) have men’s teams winning 73 out of 80 chances or 91.2%.  If we consider Grand Slam data going back to 2011-12 season, the larger sample size is 338 out of 409 (82.6%).  Recency bias for Brad is clearly at play.  Having seen wild shots all Brier (and likely in recent Grand Slams) in which a team comes back to win down 2 points, combined with his belief that tied with hammer will win over 90% of the time, the choice appears to be correct.

It’s also not certain Matt will score two points.  If Brad had thrown his last one through the rings and surrendered an instant deuce, that would be very strange (even if the math, per above, might be a wash).  But with the added chance to possibly steal or force Saskatchewan to one point, the decision to freeze-tap appears correct, largely based on Gushue’s world class ability to win in the final end if tied up holding hammer.

Further analysis on this type of situation, and consideration of a rule change to freeze guards to the centre line (a la Champions Cup and Elite 10 rules) is examined further in the upcoming April issue of The Curling News.

Posted by Kevin Palmer at 3:41 PM No comments:

Alison Goring likes to be around people. Socializing was also a form of sports psychology. She couldn't face the alternative of quiet solitude in a hotel room the night before a big game.  Alison won the 1983 Canada Winter Games and Canadian Juniors with Kristin Holman (now Turcotte), Cheryl McPherson and Lynda Armstrong.  Seven years later, with Andrea Lawes at second, Kristen, Cheryl and Alison would breakthrough, winning Ontario and the Scott Tournament of Hearts. Her last Scotties ended with a finals loss to Sandra Schmirler in 1997. That team included Kim Moore along with Lori Eddy and Mary Chilvers of the 2 Girls and a Game podcast. Alison shares stories across her career including her greatest miss, how to over manage a time clock and tips for getting bar service at the Welton Beachamp Bonspiel. Cheryl joins for a brief cameo at the end as we try to recall who they beat in the final of the 1990 Ontario Tankard. Sparked by Alison's lesson from Ed Werenich at the 1990 World Championships, the episode begins with an inquest into the history of drag effect and this fascinating last rock from the semi-final of the Moncton 100 Bonspiel.

Posted by Kevin Palmer at 1:44 AM No comments: