A Short Diatribe on Even Ends

Before diving in, I want to mention Ken Pomeroy's new curling website DoubleTakeout.com . Ken is an esteemed analyst of US college basketball and in recent years caught the curling bug. You can hear how he came to the sport in his interview on a recent episode of the Rocks Across the Pond podcast. Thank you to Ken for recharging my CurlWithMath batteries and despite podcasting and other projects on the go, I will be trying to post more here than I have in recent years, including an updated Win Probability chart and revisit to a classic article "Is Curling a Battle for the Hammer?".

As I wrote in a past Curling News (also released on this blog) we need more collaboration in analytics to move the sport further ahead and I'm thrilled to see Ken bring his court-side math chops to the ice with painted rings. Now on with the article....

If you've watched curling on television in the last few years it's very likely you've heard a commentator mention the term "even ends".  Perhaps you wondered what it meant.  Or maybe you felt like an insider because you recognized the great decision a team made to carry over their hammer into an even end to improve their chance at victory.  If you are in the latter category, then I'd like you to consider that the team may in many cases be making an irrelevant choice which neither increases or decreases their chance at victory, or possibly a mistake.
I am not going to quarrel with blanking an end when you are tied or ahead with hammer at any point in the game. Generally, this either improves your position or has limited or no impact on the outcome. I won't discuss the irrelevance of blanking the first end to get the hammer in the second (an "even") end.  Choosing to blank the first end may or may not be a great decision, depending on many factors, such as opponent, ice conditions, style of play or the number of cocktails you had the night before. But please don't say you blanked the first end because "2" is an even number and you are expecting to trade hammers for the next 7 or 9 ends.
I want to look specifically at a team one down with hammer, charting their strategic course when 4 ends remain in the contest.  Specifically, the 7th end of a 10 end game, or 5th end of an 8 end game. When behind by a single point in this situation, some teams are maneuvering the play to increase their chance for a blank, in order to enter the final three ends and get "two hammers to one".  It sounds exciting doesn't it?  A blank in this fateful end appears to mean you get twice as many hammers than your opponent.  What this concept misses, however, is you have hammer right now and many things can still happen to thwart your comeback. Steals happen. Three enders happen. And sometimes, no one scores and the hammer doesn't come back to you when you thought it would. You can also become predictable and if your opponent knows what you are planning to do, they may gain a strategic advantage.
I've written before on this topic and even submitted a paper to the MIT Sloan Sports Analytics Conference in 2014 that included some analysis.  Without re-hashing it, I'll summarize by saying it's simply not that substantial a difference. The study indicated a weaker team improves their chances by blanking against a stronger opponent, the stronger team is better to stay aggressive and if two teams are equal, it really doesn't matter.
Team Mike McEwen made a decision in the Wild Card game ahead of the 2020 Brier that came straight out of the Even Ends playbook. Trailing Glenn Howard 3-2 with hammer in the late stage of the 7th end, Mike made no hesitation in peeling a corner guard with his first stone, rather than choosing to come around and attempt to score a deuce. 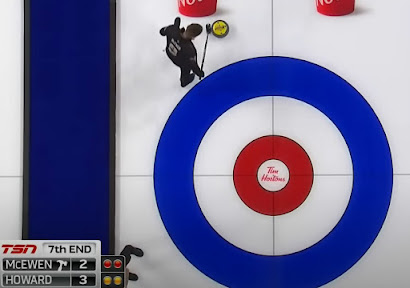 McEwen is Red
I can appreciate some aspects of the situation might be a concern. The guard is tight to the rings and is a Howard stone. If Mike makes a perfect come around, the greatest risk is Glenn playing a straight back raise and nutting it, forcing McEwen to either draw for one or attempt a difficult raise take-out in order to blank the end. My suspicion, however, is Mike may have chosen to peel the guard regardless of the colour or location of the stone. I recall a similar scenario later in this Brier where a team chose to peel their own guard in the 7th end (or, in a hazy state of quarantine I might have dreamed this since I cannot locate it on Curling Canada's YouTube channel). Let's consider Mike's options...
Peeling the guard will result in a blank nearly every time, so we'll assume 100%. WP = 42%. We'll also assume a draw attempt by McEwen will hit the paint somewhere.
If Mike is able to score two points, his WP increase to 63%. But failure to score two and being forced to a single will result in WP = 37%. Math would suggest it's preferable to score two right now and all the advantage sits with Mike. He has two rocks to Glenn's one and barring a horrible mistake, no fear of a steal. So what might happen if Mike chooses to draw instead?
If McEwen makes a perfect come-around, as stated earlier, Glenn is most likely to attempt a run-back. The only risk in this case would be a perfect nut-nut with Glenn raising his guard perfectly and sitting completely buried. If he's able to accomplish this, Mike would be faced with a draw for one or run-back for a blank, introducing more risk that he has right now. Any other instance in which Glenn makes the run-back (ie. most of the time) and is not buried, it's a blank end.
If Mike makes a poor shot and comes behind the tee line, Glenn may choose to draw down and freeze to the McEwen stone and again, Mike may be forced to a single. However, sometimes McEwen comes deep and Glenn makes a poor shot, leaving them a chance for two points.
What if Mike makes a perfect draw every time? Let's consider Glenn makes a the nut-nut run-back 10% and misses 20%. Mike increases his WP to 46%. In fact, if Mike NEVER get 2 points, and Glenn makes the nut-nut an astounding 20% of the time, his WP still only drops to 41%!
Now, let's estimate Mike comes deep on the draw 30% of the time and Glenn draws down on top and is able to force 90% of the time this happens. Adding to the scenario above, his WP = 47%. Note this is a very conservative approach as Mike should be considered comparable or even more accurate than Glenn at this stage of their careers and those estimated percentages are likely more in his favour.
Some readers might consider a third option for Team McEwen. Mike could draw mostly buried, leaving Glenn a small piece of granite. This increases the likely-hood Glenn will try to hit the stone and roll to the open, forcing a blank, introducing some risk of a missed shot and deuce for McEwen. Also makes the perfect runback much more difficult. Not certain the slim chance of Glenn wrecking on the guard is worth the attempt, but others may disagree.
Looking at these numbers, I can understand McEwen's rush to peel the guard as it eliminates any variability in a game that means everything (win you're in the Brier, lose you go home). It's fair to say the decision in a vacuum is not so clear and I would hope, if the guard was a Red instead of Yellow, Mike would not so quickly toss aside a possible skip's deuce, simply because it was the 7th end. One can only wonder what they would have done in the same situation one end later?
You can watch the situation unfold here... https://youtu.be/se8IveYx9UY?t=5727
Posted by Kevin Palmer at 2:15 PM