I just finished watching the first season of Showtime's "Masters of Sex".  It follows the story of William Masters and Virginia Johnson and their ground breaking research on human sexuality that began in 1956.  It's been renewed for a second season and I highly recommend it to most people over the age of 21.  I just listened to a recent Andy Greenwald podcast from Grantland with show runner Michelle Ashford.  With about 9 minutes remaining, she talks about Virginia Johnson, her motives and a major theme of the show.  From the interview:

"It's about ambition and the notion of a woman being ambitious is horrifying in the 50s and even very uncomfortable today.  The idea of a woman being sort of nakedly ambitious kind of sets everyone's teeth on edge.  In men it can be considered attractive and viral while in women it's kind of considered gross or unbecoming"

Michelle's words immediately hit me. Jennifer Jones.  Not just Jennifer herself but the perception of her by media and fans.  Why is an ambitious women so clearly attacked and scorned while an ambitious man is seen as driven and determined.  Over the years, Jennifer has removed players on her team, including popular third Cathy Overton-Clapham.  These moves have met with outrage, some of which continues today, yet Jeff Stoughton dismisses his long time lead Steve Gould and there is no more than a murmur, which goes quietly away within a short time.  Brad Gushue drops players as often as Bill Belichik, but their goals are the same, to win. A gold medal in Turin with Russ Howard was met with cheers rather than jeers.  Kevin Martin has a few bumps in his legacy (just ask Randy Ferbey).  Personnel issues,  financial dealings and even being booed at the 1991 World's in Winnipeg, all incidents of the past that aren't part of the current conversation.

Jennifer is still disliked by some who think her treatment of Cathy was unfair.  They forget that sport is about winning and the decision was likely harder for Jen than they realize.  I'm not saying I agree with Jennifer's moves or the manner in which she dealt with her decision, but why should I hold it against her more than I would her male counterparts?  That is her business and the effects on her relationships with friends and peers are hers to deal with. But it's clear to me the opinions of Jennifer, and their strength and longevity, are influenced by the fact "she" is not a "he".

Why can't we be comfortable with a woman who is driven to succeed?  Does society really feel this way about women?

Colleen Jones, announcing the non-Canada semi-final, remarked on Jennifer's change in demenour after having given birth.  Would she or anyone else make the same statement about a man?  The comments were meant to be positive but why do we consider Jen's transition from cold hearted competitor to nuturing mother to be worth discussing?  Does it make us like her more to imagine her as caring rather than driven to succeed on her own terms?

I see Rachel Homan at an early age coming under similar scrutiny.  Before she entered the media scrum after the Trials semi-final, someone made an off-hand joke about Rachel that was (to be honest, funny), but rude and thoughtless (something about strangling kittens maybe, but I don't recall exactly).   Doubtful anyone would make a similar joke about a man in that situation.

Congratulations Jennifer.  You worked hard for this achievement. You have earned it.  Your effort, determination, and ambition is admired.  Anyone who thinks otherwise is a bitter, sad little troll who requires counselling for their inability to deal with their own regrets in life.

Other teams and countries still have ambition to claim medals.  What a single game can mean...

Bronze medal for Rui Liu, or even a close contest against Sweden's defending World champions, will show the world the Chinese men's program has reached a different level and this week was not just a fluke.  It may also help spark actual participation in a country with 1.3 billion people but only 5 curling clubs and 300 teams.

Gold for Canada will silence critics who say the grassroots of Canadian curling is in decline and it's unable to nuture new champions to rival the country's aging stars. It could also mean future curlers will look more like hockey players than school guidance counselors.

Gold for Great Britain will end the not-so-silent whispers about a sinister backroom program with too much money and power.  It will justify the act of players being chosen and slotted in by coaches and sport managers, the way Tywin Lannister controls his own children.  What if Thomas Ulsrud makes the open hit on his last shot in the 10th end?  Murdoch most likely loses, fails to medal, and the decisions and structure of the Scottish program would be under scrutiny.  Instead, a silver is assured and a gold will silence the critics who believe curlers should establish and develop curling teams.

A bronze for Sweden will be a nice consolation prize.  They may have been the best top to bottom team this week and like the Swedish womens teams who've been in the last 3 Olympic and World finals, they will return.

A few game notes from today:

1. Tied without hammer, Sweden chose not to play a centre guard in the 6th and 7th ends of their game against Canada.  Apparently they were running into clock trouble, but to allow them both to be blanked, even hitting a tight guard late in the 6th, was dumfounding.  Sweden might point to the pick or key misses late as the difference, but strategy didn't help their cause either.

2.  Kaitlyn Lawes first shot in the 9th end received cheers and high fives all around, but it was likely not the best call.  Rather than peel out the Swedish shot stone (green line), Jennifer could have attempted to hit and stay, while doubling off her own stone in the back four foot (blue line). 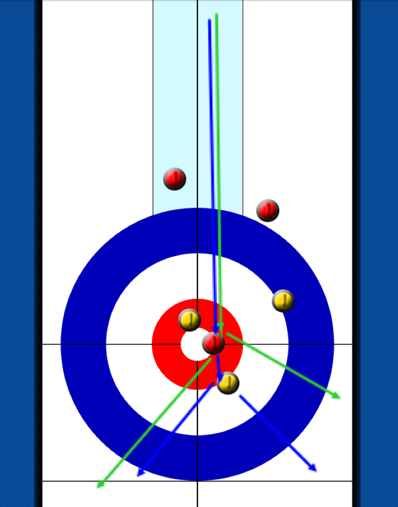 After Swedish third Christina Bertrup makes a tap back,  Lawes hits and rolls away, leaving another catcher back four foot, failing to block the draw path or to remove that same catcher.  If Bertrup had made the freeze on her last shot rather than sailing between the yellow stones and through the rings, the end and game could have been very different.

3. Worst line call of the Olympics.  Sweden's double for four in the 5th end was easier than it appeared and actually overcurled, with the sweepers held off until nearly the hog line.

4. In the 7th end, 1 up without hammer, Switzerland benefits from a miss by Scotland third Anna Sloan (her draw sails through the house). Ott decides to peel the corner guard while sitting one top eight foot.  In fact they double off their own rock by accident.  Not certain I like this decision.  The Swiss are choosing to allow a blank rather than go for a force, but they may not have as good an opportunity later.  In fact they end up in a mess next end and Scotland gets a key deuce on their way to the bronze medal..

Congratulations to all the medal winners and good luck to the men tomorrow (or is it today?).