Sochi 2014 will possibly generate more petabytes of recorded Olympics than any in history.  I'm not a morning person and generally function better as a night owl, but from 2 AM - 7 AM I still need to sleep, as do most people without insomnia.  Turin was in 2006 and though Tivo had strong market penetration, the PVR was still in its early days.  Come to think of it, I might have just been laying my VHS to rest about that time.

I hope that curling is taking up a good size chunk of recording space on American devices.  It's been a struggle for the US teams, a 3-15 record is not going to generate much buzz south of the 49th parallel. Just imagine the numbers for ratings if the US was winning. Curling has an opportunity every 4 years to gain exposure and hopefully one of these Winter Olympiads a US team will have make a run and curling will get an even bigger boost than Vernon Davis can provide.  The United States men won 3 world championships during the 1970's, but haven't reached a final since 1981 (but did pick up a bronze medal at the Turin Olympics). USA Women appeared in 6 finals from 1992 to 2006, winning once, but have failed to medal at an Olympics.  With Olympic funding and a history of the game across most Northern states (and some Southern), it's surprising that the US appears to be falling behind the rest of the world.  They better hurry hard up (sorry) and improve their game because the country that owns most of their currency appears to be sweeping ahead (sorry, again).

The China women's team won a bronze medal in Vancouver four years ago and their mens team impressed in Sochi with a 7-2 record and are poised to add to that collection.  After a great start (4-2) the women's team dropped 3 in a row to fall to a 4-5 record, just one win out of a tie-breaker playoff game.  Bingyu Wang did win a World Championship in 2009 after making China's first finals appearance in 2008.  The 2009 finals drew 54 million viewers in China.  If Rui Liu wins his semi-final against Canada, that record will likely be not just broken, but annihilated during the gold medal game.

On second thought, maybe the PVRs of the world get a greater workout when the Olympics are held in North America and the Chinese are sleeping.

The Sochi curling fans don't appear as rowdy as those in Vancouver.  I'm not certain if this is due to the distance between the seats and the ice, the organizers asking for more decorum and having security toss unruly fans out of the building, or the fact vodka is not being served at the venue.  The home town squads didn't qualify for the medal round, both teams finishing 3-6, but coverage of the Russian women's team should encourage tremendous growth in the Russian junior men's programs.

Maybe the play-offs will bring a little more noise than we've heard up till now.

I'm going to try and provide analysis for all the play-off games, including the one tie-breaker, Tom Brewster David Murdoch of Scotland Great Britain versus Thomas Ulsrud of Norway.

Both teams had a chance to avoid this match-up.  Heading into the final draw, a win by either team would have secured a play-off spot and only by both winning (or losing) was the tie-breaker required.  GB had a tough loss to China, with David coming light on a critical draw in the 8th end.  Norway lost to rival Denmark (yes, they're rivals, who knew?) in a low scoring affair.

The tie-breaker was a hard fought (if somewhat sloppy) battle with Murdoch making a spectacular shot on his last to score 2 points. 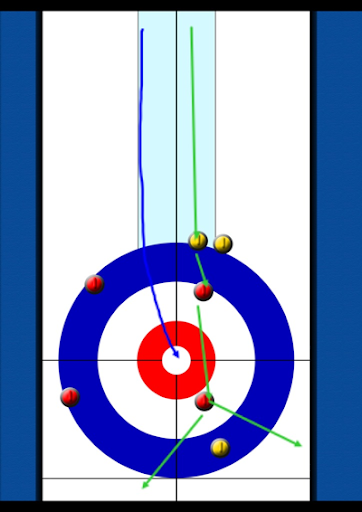 Rather than draw for one and head to the extra end (blue line), David chooses a runback double for the win (green line).  Some would consider the call risky, but it's riskier to head to an extra end without hammer and only a 20% chance to win. If David figures to make the runback double more than once in 5 tries, it's the right call.  Some other interesting decisions:

Murdoch decides to try a more difficult shot to generate nearly the same result.  Rather than pick out the shot stone (green line), they decide to play a thin hit on the high red stone (blue line). 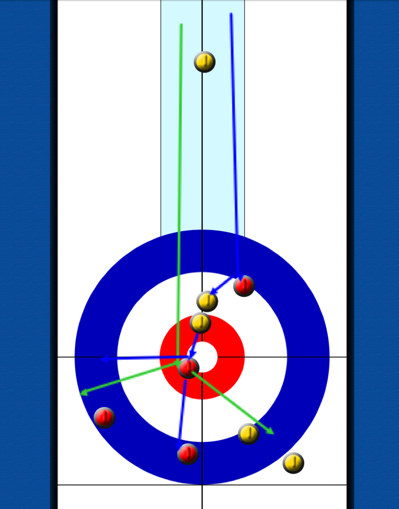 Great Britain were perhaps hoping the yellow stone top four foot would sit top button but it instead spins out to the wings and leaves Ulsrud an easier draw than he would have had with the other call. 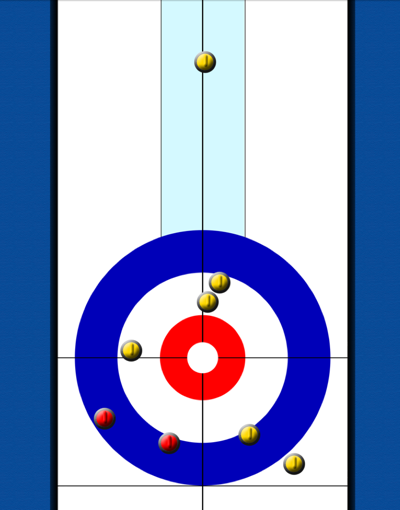 The only reason they may consider this shot rather than the pick (green line) is possibly jamming the shot stone on their yellow at the back twelve foot (5 o'clock) and the fear of Norway then playing a long raise double on the GB centre guard for a possible four points.  It would be an extremely risky double with a miss resulting in a steal and I can't imagine Ulsrud attempting it.  A more difficult shot to garner the same likely result, one point for Norway.

On third's last, Murdoch chooses to draw around the centre rather than making a play on the Norway stone. 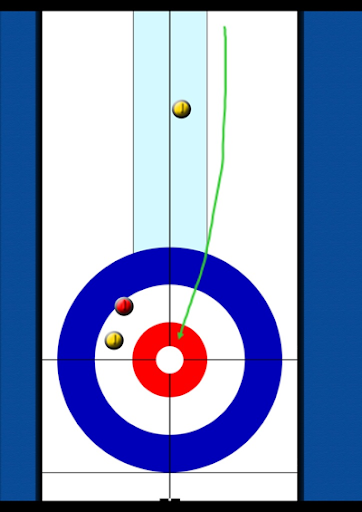 If you were watching the CBC/TSN/SportsNet coverage, you heard commentator Mike Harris discuss the risk of this call. In most positions, GB will leave a chance for Norway to sit two.  GB comes to the tee line and Norway does make the nose hit double and sits two.  Murdoch fails to make a double on his next and the result is a deuce and 2 point lead for Norway at the break.

Sitting one in the rings, rather than draw to the open side, GB decides to put up a corner guard. Norway considers their options on third's final stone, facing this: 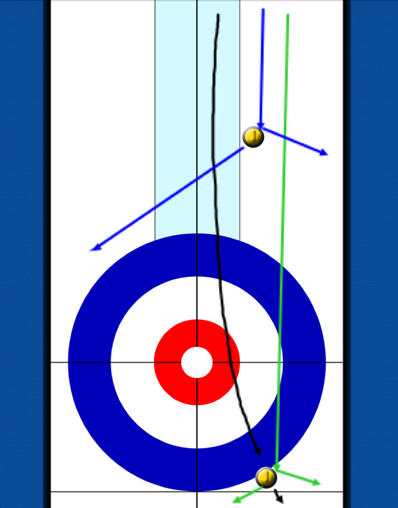 At first they consider picking out shot stone (green line) but reconsider and decide to peel the guard (blue line).  They could have also tried to hit and stay (black line, could also have been attempted with other turn).  This example shows just how dangerous a corner guard can be.  Murdoch has a good chance at scoring two and, after a missed double attempt by Ulsrud on his final shot, succeeds in tieing up the game at 4-4.  You can make a case for each of these calls but I might have preferred taking a chance to create a force.If they hit and stick, GB will ignore the rock and try to come around.  Any mistake and Norway can hit and possibly sit two.  Even if made perfectly, Norway can corner freeze and either create a force or  surrender a deuce.  It seemed unlikely GB could score three points given the situation, the only thing Norway should consider a problem.

Ulsrud has two key misses on his final shots in the 9th and 10th ends.  In 9, he misses a double that could have resulted in a blank (assuming a GB nibbler near the back rings was not in the house).  In the 10th, as great as David's winning shot was, if Ulsrud hits and sticks rather than roll out on his last, Murdoch's shot isn't there and David instead would have a difficult shot just to tie the game aand send it to an extra end.

So the final 8 are settled.  Unlike the Brier, Scotties, Worlds (and many other major events) the Olympics continue to be a one game knock-out rather than a Page system.  In the Page, the team in first or second is rewarded with a second chance should they lose their first playoff game.  In the Olympics, a loss means  you have to hold back the tears and disappintment then compete in a winner-takes-bronze-loser-gets-zilch medal game.  The semi-final is perhaps equal to the intensity of a gold medal game as a win ensures a medal while a loss and you could leave empty handed.

For those in the Western Hemisphere, you can stay up all night and watch back-to-back-to-back curling.  For me, I will have my PVRs and Tivo working overtime and enjoy the games with my breakfast.